Panto returns to Livingston this year with Howden Park Centre and Martin and Martin Theatre company!

Brought to you by the same team that created the hit production ‘Bairn’s in the Wood’ in 2021, this year’s panto cast will also feature local talent from two West Lothian based dance schools.

Young performers from Proscenium Stage School and Nu Moves Dance Studios will star alongside the professional pantomime cast in a hilarious family-friendly production of Mother Goose.

Mother Goose will be Martin and Martin Theatre company’s fifth Panto at Howden Park Centre and the professional theatre company are delighted to be working with members of the local community to produce an extra special festive treat for all the family.

Writer and Director Martin McCormick has said “We are all delighted to return to Howden Park Centre with this year’s panto, Mother Goose.  It promises to have a unique story, some brilliant laughs, not to mention loads of great songs and dance routines!  This year is particularly exciting as we are working, for the first time ever, with Proscenium Stage School, which means there are many local young people on stage.  They have already started rehearsals and are working their socks off to ensure this year’s panto will be the best one ever!  We are delighted that the panto will allow us to engage further with the local community, deepening our connection with the people of West Lothian as this is at the heart of what we believe Panto should be."

Proscenium Stage School opened in 2017 with the aim of providing children in West Lothian to the same training and standard of performing arts as you get in the bigger cities without the need to travel.

Chloe Edwards Choreographer and performer said’ ‘Proscenium Stage School is absolutely over the moon to have been offered to take part in Howden Park's Pantomime this year. This gives our students the most incredible opportunity to spend the festive period doing what they love the most...performing!’

Alongside performers from Proscenium, there will also be a small group of pupils from Livingston based Nu Moves Dance Studios joining the panto cast. Nu Moves offer a fun and friendly dance school environment providing children's dance classes such as Acro, Ballet & Hip Hop throughout West Lothian.

Depute Council Leader Kirsteen Sullivan visited Howden Park to meet the team and celebrate the announcement of this years’ show.  Speaking of the production, Kirsteen said:

“The Christmas Panto at Howden Park Centre is always fantastic fun and my own children are already looking forward to it. There’s nothing like a great panto to get the Christmas season underway and bring generations of families together for fun.”

Mother Goose runs from the 2nd to the 28th of December 2022.  Tickets are on sale now from www.howdenparkcentre.co.uk or by calling the Howden Park Centre box office on 01506 340700. 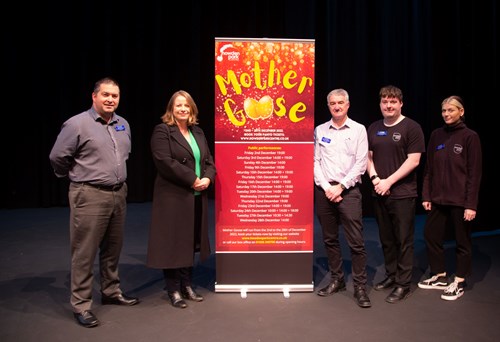 🚨Our Black Friday Deal is so good we've EXTENDED it!🚨 Become an Xcite member for only £9.99 and pay NOTHING untiltwitter.com/i/web/status/1…8R

Xcite Armadale are hosting a coffee morning! ☕️ Come along on Wednesday 14th December from 9am-12pm for a free tea… twitter.com/i/web/status/1…

❗Customer Notice - Xcite Livingston❗ Due to planned gym maintenance between 13-18th December, there will be no Vir… twitter.com/i/web/status/1…

WIN YOUR 2023 XCITE MEMBERSHIP! 🤩 This December, all members who visit an Xcite venue on average twice a week will…twitter.com/i/web/status/1…z

We value our members and their opinions. 💙 Check out what our fab member Dorothy @ Xcite Armadale, said upon visit…twitter.com/i/web/status/1…o

❗️Customer Notice - Xcite Whitburn❗️ Please note, the gym @ Xcite Whitburn is now closed as it is getting a refurb… twitter.com/i/web/status/1…